A source was kind enough to provide us with emails that were FOIA’d from CUNY. Selected excerpts of these emails were used by a handful of twitter folk to undermine Dr. Hoau Wang and spread FuD around the investigations currently underway (at CUNY).

From 06/14/21 – 06/29/21, Cassava’s share price traded from 75.xx to 85.xx and we can thus estimate he held ~1600 shares. This isn’t very much in terms of motive to destroy a substantial and meaningful reputation as a scientist and professor spanning decades. Additionally this underscores that all of Dr. Wang dealings with Cassava have been under appropriate service contracts.

A FINRA complaint was lodged against Cassava Sciences with regard to trading activity following the phase 2b redo. Considering the appreciable share price increase following those results, a routine request for information was sent over to Dr. Wang.  His responses leave no room for ambiguity. Below is a summary:

We previously discussed how the blinding protocol for a clinical trial has lots of checks and balances in place. Cassava’s p2b was quadruple-blinded. In reviewing the Citizens Petition, the FDA is likely to have looked through the logs of the electronic data capture (EDC) system while also reviewing the end-of-phase 2 meeting notes before proceeding to dismiss the petition.

Bios Partners is the lead venture capital firm behind Cognition Therapeutics (CGTX – more on them a bit later). In the email excerpt below, Tim Van Treuren, a senior analyst with Bios Partners, emails AAIC directly (instead of Dr. Wang) with questions on the SavaDx poster. 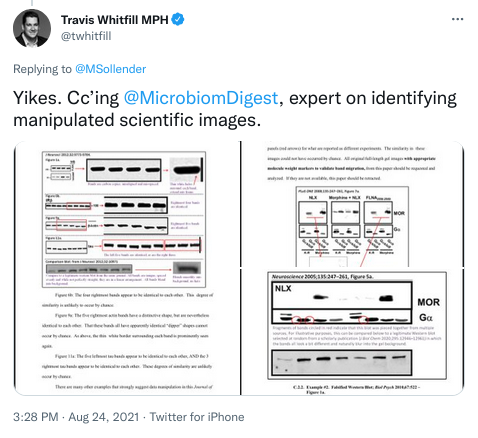 There seems to be more than cursory interest from Bios Partners regarding the development of PTI-125 especially considering the phase 2 trials for their lead candidate CT1812 showed robust biomarker improvements.

PTI-125 earlier showed a whole panel of biomarkers correlating and improving over 28 days. Many twitter scientists (with unimpressive credentials) frequently bring this up as results that are impossible over such short periods of time. But here there are 2 biotechs showing similar results.  Also this excerpt from a patent filed by the CGTX team is telling in that it reads just like the MoA of PTI-125.  Is it a coicidence that the lead venture firm behind CGTX (Bios Partners) is busy trying to undermine Cassava while at the same time CGTX is taking a page out of Cassava proposed mode of action? We think not.

Adam Feuerstein is infamous for handing out public (and private) invitations to short biotechs.  We saw this recently when he attacked Anavex Life Sciences over a delayed regulatory update, while waiting weeks to time his FuD right when the AVATAR study results dropped.

Adam has also been on record attacking Cassava Sciences with misogynistic statements and insinuations of fraud while maintaining ties with the authors of the Citizen Petition. Below is an excerpt of an email from him to Dr. Wang.

There is an active short/distort campaign against Cassava Sciences. The CUNY emails were selectively released to paint the company in a bad light. Short investors have targeted the firm since Oct 2020 starting with FINRA complaint(s). Jordan Thomas has used insider knowledge from his time with the SEC, to file a Citizen Petition as a whistleblower representing many yet anonymous clients. He either knew or should have known that the Citizen’s Petition procedure was never meant to apply to drugs in phase 3 trials. CUNY emails including confidential information and data from previous experiments were provided via FOIA to Summit Point Capital, a hedge fund in NY. There appears to be on-going collaboration between them and some of the twitter scientists in sharing CUNY emails – this is further supported by the recent procurement of Cassava’s Phase 3 Investigator Brochure.

In upcoming articles we are preparing to post more CUNY emails that reveal insightful interactions of Dr. Wang. This includes information on a potential new indication for PTI-125 and our thoughts on SavaDx.

Published by the ad-science team

View all posts by the ad-science team